Alison was named the “Female Indiana Jones” by Time Magazine and the “Oprah of Adventure” by The Huffington Post and O Magazine.

How and why was I able to do such great, exciting stuff? Because I grew up home schooled all around the world by my wild and daring adventure pioneer parents, who are so extraordinary I have often said to myself:

“I love them, but are they secretly from another planet?” 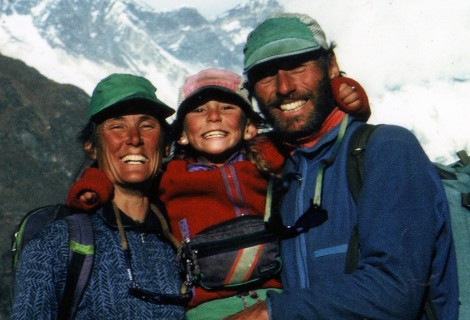 My papa, David Blehert, is a world-renowned adventure photographer for companies such as NATIONAL GEOGRAPHIC MAGAZINE, PATAGONIA, EAGLE CREEK, and TEVA. He is famous for going after, and always getting, and bringing back the impossible “extreme shot” from some of the most primitive, inaccessible, wild, and often dangerous wastes, jungles, and wilderness areas on the face of the earth. My mother, Deborah Koehn, is a naturalist and internationally acclaimed yoga devotee and teacher. And together, as a family, we formed a company called YOGA ADVENTURE and have guided trips around the world for as long as I can remember.

COULD YOU IMAGINE IF YOUR FIRST BEST FRIEND WAS A MONKEY IN THE AMAZON JUNGLE?

When I was two months old, my parents took me skiing on Ausangate, the highest peak in Southern Peru, and since then my life has been a continues whirlwind of high adventure; I have explored and lived in the most remote, strange, colorful, and bizarre corners of this planet and gotten to know, like and become friends with all manner of indigenous people, and by doing so become part of an ever growing global family. And as you might have guessed, my ad-lib, free-form, on the move, literally homeless version of “home schooling” took place on the back of, or under, a camel, in a tent in a blizzard on the flanks of Mt. Everest, on a camel safari across the Rajasthan desert, and wherever else my adventure and nature photographer parents’ job took them. 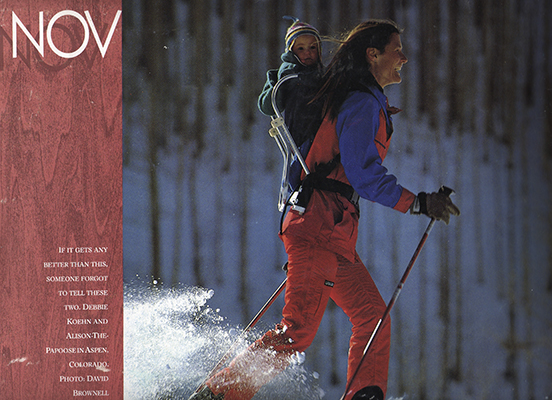 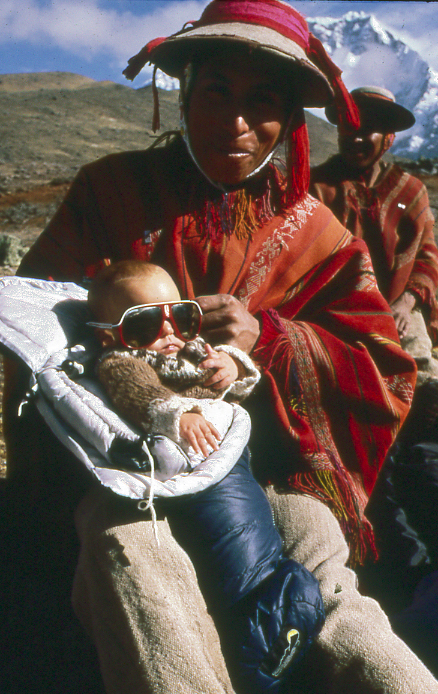 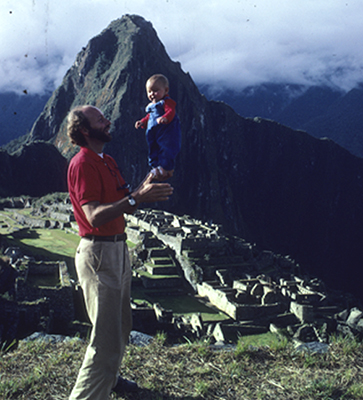 THE WORLD WAS MY SCHOOL AND MY PLAYGROUND

What was and is normal family life for me is light years away from most peoples’ idea of normal, but for me it was the only life I knew from birth until I first saw the inside of a school room on the high slopes of the Himalayas in Nepal at the age of seven. I thought – “Wow! I’m in an actual school with other children. And a teacher. Inside a building. How strange. How weird. How exotic.” 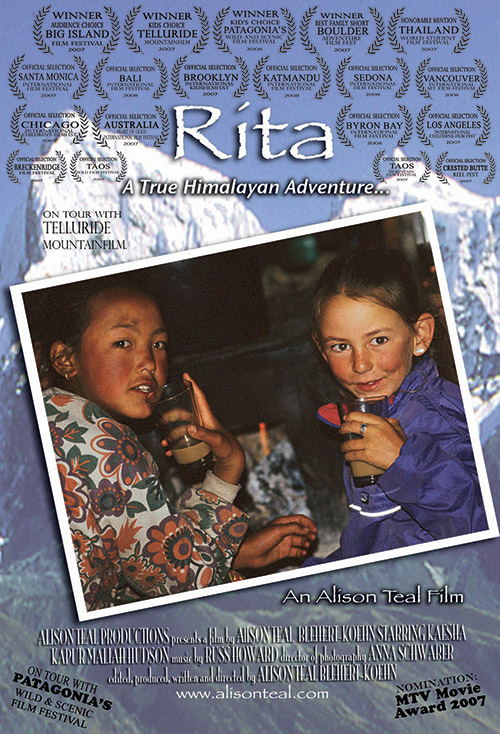 My short thesis film Rita, a Himalayan adventure showing how I got my first taste of being inside a school at Mt. Everest won international acclaim at numerous film festivals including Telluride, where I went on to win again the next year with my Moroccan Surf Adventure Film: Snaked! — all my films I produce, direct, shot, edited, and host/act in.

At twenty-three, I completed my own first feature length documentary “INCANtations” which also earned me international recognition after premiering at Patagonia’s Wild and Scenic Film Festival.

I had the honor of being named one of the top 25 college filmmakers by MTV and my film Rita was nominated for an MTV movie award. It was incredible also be honored by Meryl Streep for being one of the top emerging female film makers. I also was excited to work on Hollywood blockbuster Eat Pray Love since Ketut Liyer was my painting teacher growing up and the movie was filmed in the same house in the village in Bali where I spent many of my childhood years.

After graduating from film school, I decided to combine my love for filmmaking, acting, and exploration and create a new media storytelling series called Alison’s Adventures to share my experiences with you through films, photos, books, and even inspirational speaking. And now, with the honor of the title ‘The Female version of Indiana Jones’ by Time Magazine (except with a camera and my pink surfboard made from recycled coffee cups), I journey into ancient cultures seeking out the greatest myths, mysteries, and legends, not to mention sharing the secrets of survival, sustainability, and happiness.

Throughout my adventures, I have discovered that our most valuable treasure on earth is water. Reefs are the rainforests of the sea and provide most of the world’s oxygen, and I’ve witnessed firsthand the detrimental effects from toxic sunscreens, plastic pollution, and climate change. Although my adventures are memorable, it is the impact that each quest has on the world that fuels my soul. For example, exposing trash island helped lead a world wide plastic cleanup, making a film on our dying reefs in Hawaii was instrumental in banning toxic sunscreens, and diving with top scientists for the oldest human skeletons in the Americas revealed important information on climate change.

From Trash Island in the Maldives, to the rivers of Los Angeles, to home sweet Hawaii and the beautiful cenotes in Mexico, water is under threat by the people who need it most—us. 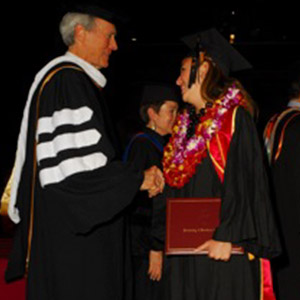 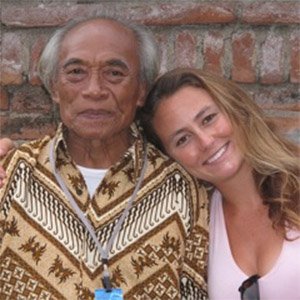 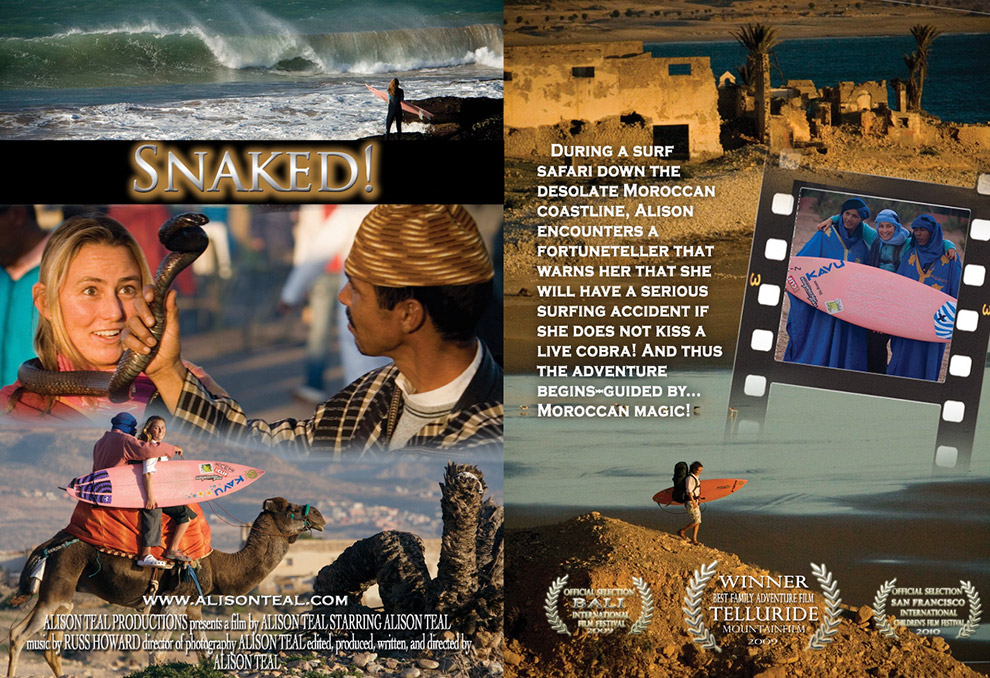 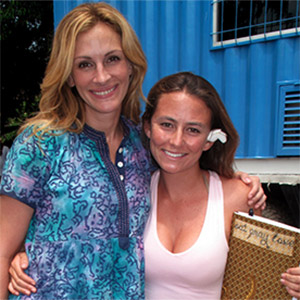 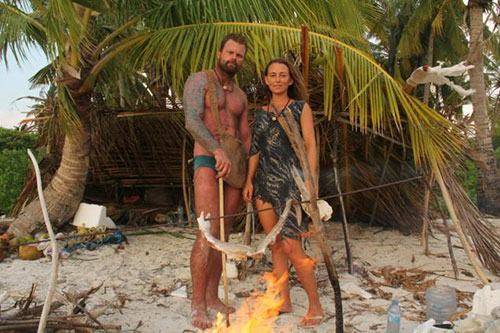 I starred in the first season of “Naked and Afraid,” Discovery Channel’s highest rated series of 2013, and most-watched show in the network’s history. On “The Island from Hell” I survived for 21 days on a deserted island in the Maldives and earned the highest PSR (Primitive Survival Rating) of season one.

I decided to combine my love for filmmaking, acting, and exploration and create a new media storytelling series, to share my adventures through films, photos, and inspirational speaking.

And now, like a female version of “Indiana Jones” – with a camera and a pink surfboard – I journey into ancient cultures to share global secrets of survival, sustainability, and happiness through unique style of storytelling guided by my voice over and the wild characters I meet along the way.

Alison’s Adventures has a robust and global community on social that numbers millions of views and partnerships with top brands.

Growing up in Hawaii inspired me to love the ocean and dive into protecting it. We built, by hand, an off the grid “Robinson Crusoe Style” sustainable treehouse which has become a renowned retreat center and my beloved home. 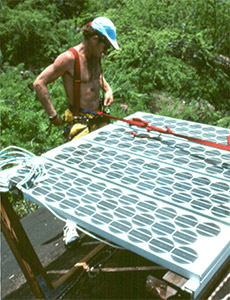 My papa, David Blehert, is one of the first pioneers in Green Living and has taught my mom and me how to leave the smallest carbon footprint possible. He works hard to make our home as self-sustaining as possible, and his work has kept our house almost entirely “off the grid.” Little by little, he constructed an off the grid solar electric system, which runs our washing machine, four refrigerator/freezers, power tools, lights, and kitchen appliances on solar power alone!

David also created his own “Vegetable Oil Filling” station on the property, and converted his F350 diesel truck to run off pure, recycled vegetable oil. Also at my home, Hale Kai, we practice waste recycling, and compost all of our organic waste to produce soil for our organic gardens, which are always full of mangos, papaya, acerola cherries, herbs, tamarind, coconuts, pumpkins, tomatoes, and array of tropical plants and flowers. My favorite part of Green Living is waking up in the morning and picking a home grown papaya coconut or a star fruit for a mid day snack.

PINK is the new GREEN

As an eco-life style personality, I believe in living sustainably and representing brands that focus on “Going Green.”

I have been an ambassador/spokeswoman for environmentally conscious companies like Patagonia since birth and, as a proud ambassador of Sustainable Surf, I have earned the sustainable certification stamp from the eco experts. My surfboards are “Green to the Core” made from recycled coffee cups, and plant based resin.